Prelude: Why I didn't want to use serde-json

Last week, I was looking into exploring ActivityPub, the protocol that powers Mastodon and the Fediverse. It uses a standard format for its JSON payloads: JSON-LD Compacted Document Form. A simple ActivityPub activity could look like this:

The @context field is very important -- it controls how the rest of the document is interpretted. One of the neat things that you can do is extend the document's schema:

To understand what each field name means, the @context must be referenced. In this example, ext:nose is actually a nose defined in the ext vocabulary located at https://canine-extension.example/terms/. However, the usage of ext is completely arbitrary: it can be anything.

As far as I'm aware, there is no good way to deal with this flexibility in parsing from Serde. There are some existing ActivityPub/JSON-LD related crates, but without going into specific reasons, I wanted to take a stab at my own implementation.

I knew from experience that serde_json::Value can't store borrowed data. For my use case, I wanted to find a crate that allowed me to borrow data from the JSON I was parsing, rather than needing a lot of tiny allocations for each string. Since every object key in JSON is a string, they add up quickly.

I spent some time looking on both lib.rs and crates.io for a crate that matched my desires. There are a lot of JSON parsers out there. And, a significant number of them also do not allow borrowing their data from the input.

Since I have previously written JSON parsers for other languages and I knew JSON wasn't too complicated, I decided I would just write my own.

While working on my own implementation, a thread popped up on Reddit where I discovered several valuable resources:

With these new resources, I felt silly for wasting my time on my own implementation. I relaxed for the rest of the evening, and decided to adopt the json crate in the morning.

All is not OK in the Rust JSON ecosystem

Before using the json crate, I wanted to look into it a little more. The last release was March 18, 2020. This isn't necessarily worrysome, as JSON is a very limited format. It should be possible for JSON crates to reach stability and not need additional changes. If that was the case, though, why not release a 1.0 at some point in the last 3 years? Additionally, why is there no README on the crates.io listing?

I decided to see if anyone asked either question in the Github issues. Instead, I saw users asking if the project was abandoned. Additionally, I saw what appears to be a legitimate undefined behavior issue that was reported on February 1, 2021 and was never commented on or addressed. I've verified that code is still triggering an error in Miri.

Given that I was just reading people recommending the project, I felt like the word needed to be spread about this particular crate. It has a lot of daily downloads. I filed a security advisory (sorry for all the broken audits!) and an issue that led to removing the crate from the json-benchmark project.

So what about json-deserializer, which another commentor was suggesting in a fairly-well-upvoted comment? Since I was testing my own library against the json.org JSON Checker's suite, I decided I would modify that suite quickly to test json-deserializer. Unfortunately, this led to another issue being filed.

In the face of these experiences this morning, I decided to keep pursuing my crate.

I'm pursuing a different idea than I think hasn't been fully explored in Rust (although, given how many JSON crates exist, maybe it has). I think it has some merits, which is why I have been working on this idea at all. The basic premise is that I want to parse a JSON value with as few allocations as possible. Obviously, objects and arrays will always require allocations -- there needs to be storage for the object's key/value pairs or the array values. What if you could lazy-decode strings and floats?

You might be asking yourself, "why isn't that possible today?" The short answer: escapes. Consider the JSON string: "\n". To convert this to a Rust string, the 2 bytes representing the escaped \n character must be converted to its ASCII/UTF-8 representation. From what I've found, every existing Rust crate that parses the JSON DOM will decode the escapes at the time of parsing. This means that whenever escape sequences are encountered, a new String must be allocated to store the decoded version.

My idea is to avoid that extra allocation. In JustJson, the Value type has a generic parameter. When parsing JSON, the returned type is Value<&str>. Numbers and strings are validated to properly detect any structural issues or invalid unicode, but the JsonStrings and JsonNumbers store a reference to their original source as well as some metadata gathered during the parse operation.

The only question is, does this delay of processing help or hurt? As with many things, my guess is that it depends on the use case.

Let me preface this section by saying that benchmarking JSON parsing is a challenging problem. JSON payloads vary greatly. Initially, I only tested my library against a very basic, small JSON payload in both compact and pretty-printed forms: 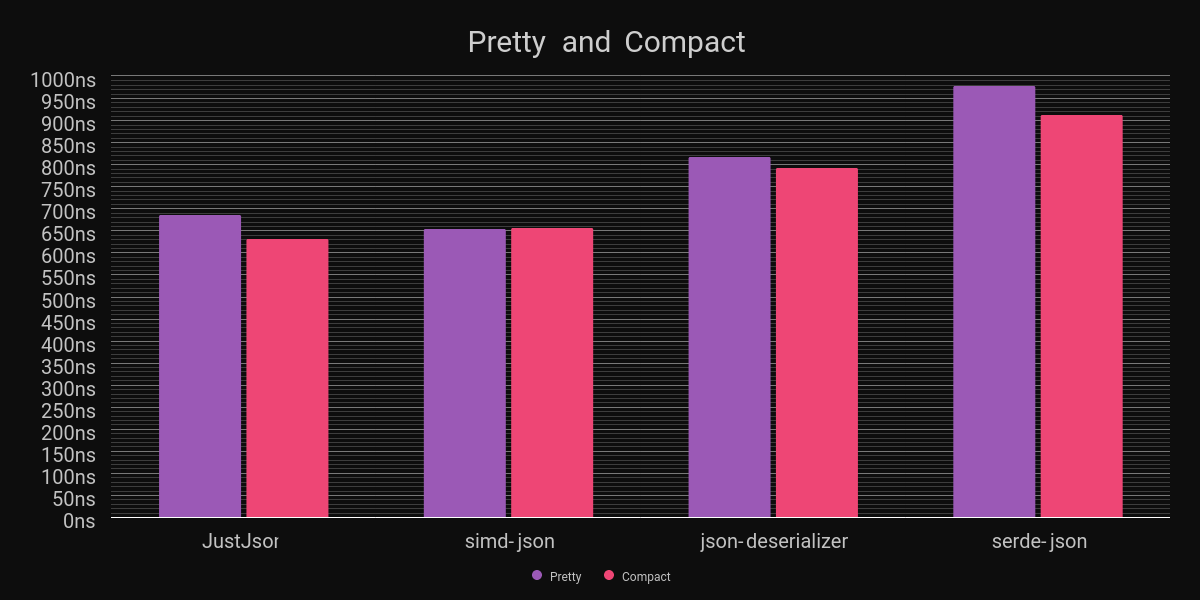 I'm very proud of these results, given that I've only spent a few days on this project. However, what about that json-benchmark? I added both json-deserializer and JustJson to the fray, and here's the raw output of the DOM benchmarks:

These benchmarks use larger payloads. canada.json is composed of a lot of GPS coordinates stored as arrays of arrays. citm_catalog.json has a fairly general purpose data set with a good blend of data types. And finally, twitter.json contains the largest amount of string data.

When looking at my impressive results for stringify, remember that JustJson is essentially cheating at this benchmark: because the JSON strings and numbers are left in their original form, converting a Value to JSON is basically a series of memcpys.

simd-json is truly impressive. If you can afford to compile your binaries with target_cpu=native, it is crazy fast. For my particular ActivityPub idea, if I ever ship it, the goal would be to allow other users to download pre-built binaries, which means I would not want to build with target_cpu=native to maximize binary compatibility. How does simd-json perform without target_cpu=native? Here's the same benchmark as before, but without the SIMD support enabled:

Well, that was faster than I was anticipating! While I am able to parse canada.json faster, the other files show simd-json as a clear winner.

What you may not realize is that you've witnessed a moment where I was happily writing a blog post assuming something I had read was true. Then, when I went to test that assumption, the results were completely different than expected. You know what happens when you assume?

I decided to take a closer look at the simd-json project. It looks quite well maintained, and while there is an open issue regarding soundness, I am quite hopeful that any such issues will be addressed over time. While browsing various issue threads and some pull requests, I found mentions of how they use a "tape" structure while parsing that was then gathered back up into the output Value type.

This led me to have one more idea on how to implement the laziest JSON parser with as few allocations as possible: store the entire tree in a single Vec and index into it. And, today I implemented it.

How does it stack up? Here's the output of json-benchmark:

This new strategy extended my lead on the canada.json file, but wasn't able to close the gap on the other two files. While it's only been a few days of working on this library, I have spent enough time on this distraction, and I am ready to get back to work on the project I was originally working on.

Why I'm continuing development of JustJson

For almost all JSON parsing use cases, I would highly recommend using serde-json. It's stable, reliable, and the convenience of Serde is hard to beat. Additionally, it can even borrow some string data when not parsing to its Value type. There's very little reason to consider anything beyond serde-json.

Given how amazing the simd-json crate appears, if you need a borrowed JSON DOM parser or want a faster Serde-compatible JSON parser, I generally would recommend it for people who do not mind having dependencies with a lot of unsafe code.

I personally have a view that unsafe code should be minimized when possible. JustJson uses unsafe, but only for one purpose: skipping a second UTF-8 validation pass on already validated data, which is serde-json and many others also do. There are currently 3 expressions wrapped in unsafe blocks in JustJson.

Beyond the limited usage of unsafe, I've focused on rigorous testing with this crate. The only remaining task I want to do is set up a fuzzer, but I am hopeful fuzzing will not unveil any issues.

Lastly, I think the idea of a very-lazy JSON parser is interesting, and it's been fun to explore so far. It fits my use case like a glove, since I wrote it with my problem in mind.

It's for all of these reasons that I am going to continue development of JustJson while still highly recommending other libraries to most Rust developers.